This Year’s NBA Summer League is responsible for some crazy moments. A Lot of players had a great deal of expectation coming into the summer league, others not so much.

Josh Hart: Coming into summer league as a second year player you are expected to be better then most other players that your playing with. This was no news to Josh Hart who racked up an impressive 22.4 PPG shooting 45%. Hart showed that he can be a solid contributor off the bench for the Lakers this upcoming season. Being able to play positions 1-3 puts him in a good situation on the same team as Lebron who can play every position and Lance Stevenson who can also play positions 1-3. 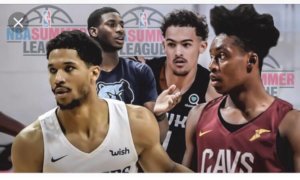 Collin Sexton: Most people counted Sexton out before he even took one dribble. He was looked at as the second best Guard in the draft behind Tre Young. Quickly he turned his doubters into fans this summer league by averaging 19.6 PPG while shooting 43% very similar numbers to second year player Josh Hart. Needless to say Sexton has made his mark as one of the more successful PG out of the 2018 draft.

Kevin Knox: Once again another Knick Boo’d on draft night. Many fans wanting the Knicks to select Mikal Bridges or Michael Porter JR, were very disappointed when they heard the commissioner announce Knox’s name. Once again similar to the Porzingis situation they were wrong, Averaging 21.3 PPG and 6.5 RPG he showed on many levels that he will be a golden key in the Knicks future. While Porter just had another surgery and Bridges played horribly in summer league i bet Scott Perry is laughing drinking champagne right about now.

On the flip side there are some players that everyone expected to show their talent and play well during the summer league. These 3 Failed to live up to their hype.
Donte Divincenzo: Being a key player in Villanova’s title tenure, Donte was thought to be one of the better sharp shooters in this years draft. So when he averaged 14 minutes a game we expected to see a great deal of 3s and running the floor. We seen just the opposite as Donte went 0-8 in the two games that he played in.

Dragen Bender: Bender showed himself to be a good versatile big for the suns last season. Therefore coming into this year’s summer league he was expected to lead the Phoenix team when instead he had a lackluster 5 games. Averaging 22.5 Mins 6.6 PPG and 5.2 RPG while shooting 37% is not good in any form. A lot of people have a tendency to say ” Its just summer league” and discredit when a player does good in summer league. What about when they do exceptionally bad though? Does it make it even worse because “its just summer league”? Bender has got some work to do if he wants to compete with Chriss for that staring PF spot in Phoenix.

Zhair Smith: Falling to the 76ers Smith was picked by some to become the steal of the draft. Philly seeing the potential in their first round draft pick had him average 24.7 Mins in summer league. With a lot of time to prove himself Smith did just the opposite averaging just 7.7 PPG , 2.7 APG while shooting 32%. Stats are just stats but at the same time poor shooting percentages could be a sign of taking low IQ shots. I can see smith maybe getting a two-way contract with Philly but he really needs to prove himself in training camp.

Written By : Michael Lynch of The BBQ Pit LIve