Although it is no New York, or California, Florida is one of the more dominate states when it comes to players that were born and raised there. This will be a “starting 5” of those players that have been to the NBA in the past or present.

Point Guard: Dee Brown
Surprisingly Florida wasn’t known for small ball. There weren’t many Point guards to choose from but i think that being said Brown makes a great pick. The Athletic high flyer was born in Jacksonville Florida. He attended Bolles high school in Jacksonville FL. He was later drafted 19th overall by the Boston Celtics in the 1990 NBA draft. Brown was also most famously known for the “dab dunk” where he does a no look in the motion of the “dab dance” that is very popular in 2018. 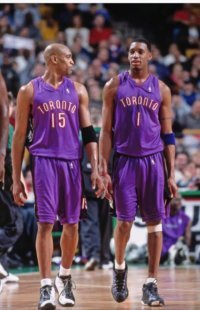 Shooting Guard: Vince Carter
Vince was born in Daytona Beach Florida where he later attended Mainland high school. He was drafted 5th overall in the 1998 draft by the Golden state Warriors when he was then traded to the Toronto Raptors for UNC teammate Antwan Jamison. Carter still plays in the NBA today, and has been a proud 8-time NBA all star.
Notable SG: Tim Hardaway JR.

Small Forward : Tracy Mcgrady
Cousin of Vince Carter , Tracy Mcgrady was born on the western part of the state in Bartow Florida. He attended high school at Auburndale high school a few miles south of his native Bartow. Tracy played basketball for Auburndale for 3 years until finally transferring to NC his senior year. Mcgrady had a 16 year playing career where he played for 7 different NBA teams and also played one year outside the US in 2015.
Notable SF: James Jones

Power Forward: Amare Stoudemire
Amare was born in Lake Wales Florida, about 30 minutes east of Tracy Mcgrady in Bartow. He then later attended Cypress Creek high school in Orlando Florida. Amare still plays to this day in the city of Jerusalem where he has been playing since 2016. Before that he enjoyed a 14 year stint in the NBA playing for the Phoenix Suns, New York Knicks, Dallas Mavericks, and the Miami Heat.
Notable PF: Udonis Haslem

Center: Larry Sanders
Sanders was born in Fort Pierce Florida before moving to Port St Lucie where he attended Port St Lucie high school. He was chosen 15th in the 2010 NBA draft by the Milwaukee Bucks. Larry played there for 5 seasons before having serious issues with anxiety and depression. Turning to marijuana, Sanders quickly picked up 2 suspensions in the 2015 season, where after he decided to walk away from the sport of basketball to chase a career in the music industry. As sad of Sander’s Case sounds he made a brief NBA return in the 2017 season with the Cleveland Cavilers where he appeared in just 5 games before being released by the team.